Julianne Ruth is the Laner of the Week! 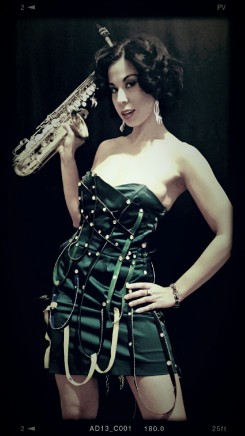 Julianne Ruth, this week’s #LOTW, is a fiesty gardener, musician, author, licensed massage therapist and lover of life!  She induldges in yoga, meditation, and creating her own organic skin conditioners and hair products.  When not working on Mustard Lane, she is a volunteer for Hospice and enjoys feeding the hungry through the Food is Free Project. Julianne Ruth has six happy cat “children,” whom she cares for with her fiancée Marino, and they aspire to begin a nutrition based foster home for neglected adolescents.  She is a Texas Tech girl who is based out of Austin, TX.  She made her film debut with an under-five in the Oscar-nominated documentary “Spellbound.”  She’s been featured in the Amazon show, Hysteria.  She’s also been in a ton of musicals in the Texas area.  Favorite roles include Consuelo in West Side Story, Procne in The Love of the Nightingale.  She has won modeling competitions for Looks West and Models West, and has been featured in hair shows for Paul Mitchell and Goldwell/Arrojo in the Texas area.  She was also an intern at NBC after anchoring, writing and reporting for a local news station.  She’s a busy, talented girl who values diversity in her career and in her life.  She is always moving and shaking.

Julianne Ruth met Kristal and the Mustard Lane gang through Backstage.com. She had a ball working the Oovoo pop-up shop last spring.  At the Oovoo pop-up shop, all the merchandise was free.  Feisty, fun college-age students (much like Julianne) would be able to obtain merchandise based on how many friends they added to their Oovoo network.  Julianne’s feistiness and positive energy helped make this event a success.  We love having her on Mustard Lane.  When Julianne Ruth is around, it’s great to be in Texas!