Reach Out and Touch Someone, but not really. 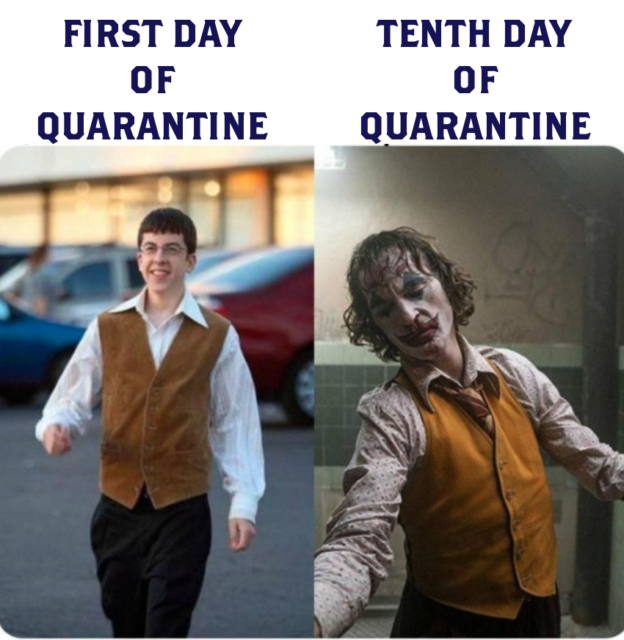 Keeping an eye on your mental health these days is just as important as taking care of your physical health. We don’t know how long any of this will last so it’s essential to watch for signs of cabin fever. Listed below are a few things for you to watch out for, and answer truthfully because no one is around to judge.

-Put on a Safari hat while watching Planet Earth

-Developed a bond with the mouse who has been terrorizing your sock drawer for months. Maybe even given him a name…like Jack Bauer… because they’re crafty and know how to extract vengeance upon they’re enemies.

-Begun a Covid-19 training program with multiple chapters including: ‘Learning how NOT to touch your face: Step One -Watch the first ten minutes of Pixar’s Up – You can cry but you can’t wipe.’

-Pulled passive aggressive pranks on your roommates like moving the kitchen table 1 inch a day.

-Quit watching ‘Short Circuit’ halfway through because it ‘didn’t hold up’ only to then spend money on watching ‘Saved by the Bell: The College Years.’

-Boiled water to steam up my bedroom window and recreate the Titanic ‘hand slide’ moment.

If you have answered Yes to any of these telling signs then it is clear you have been socially distanced too far. If you have done all of these things like myself, then it’s time to take steps toward a more healthier lifestyle.

Most of you don’t know me, but I have earned and reinforced my reputation as being a distant guy. Hell, when all of this started I thought I was born for these days. And for a person who has been known to those around him as the ‘guy who doesn’t like hugs’, you would think being blindsided by a new age of ‘don’t even breath near me or I’ll shank you with this homemade blade I learned how to make on Etsy would be a slice of gluten-free pie. It’s not.

With all of us cooped up indoors, you might look on the surface of things and think: ‘I’m afraid of what we’re becoming,’ but like in all trying times we all come out of it and we all realize that we did it together.

Your positivity, mental health and ability to socialize is just like everything else in this topsy turvy world – something you have to work at and now is the time.

While I am by no means a model of decorum (a lot of you laughed at that sentiment and to you I say…well you know what I would say), I am taking the time to work on a few things to give me all the positive vibes — and I hope you will too.

While 99% of the thoughts in my head, (and most likely yours) are not a gem, I am forcing myself more to get them out there to friends. We are socially distanced and communication is key no matter how silly. Your phone bill needs to go up this month. For instance normally when I walk into a grocery store –and lets say in this scenario for some reason, all the bread is gone, I don’t know why, maybe the Coronavirus French Toast Festival is in town. Normally I would walk past the desolate aisle staring at frustrated shoppers, and as a proud non bread eating Celiac whisper to myself ‘Hahahaha f*** you.’ Now when I walk into the Grocery Store, which more closely resembles the hyena ridden dark lands of the Lion King (‘Everything the light touches in this Trader Joes is yours, except that aisle, Jeremy Irons owns that part.’), and I see an aisle devoid of bread – I text my uncut gem to someone. It’s cheesy, trivial, meaningless and doesn’t bring about a change in the world, but it just might put a smile on someone’s face and that’s about the best currency out there these days.

Oh and if you’re concerned for me and what a Celiac is doing to survive these days, don’t worry. You know those rice cakes in aisle 6 that look and taste like they might be scrapings off the wall? Yeah, those unpopular morsels? I get ’em all to myself.

For all you creative types out there, use these days and these hours to push yourself. Write that script you’ve always wanted to even if Woody Allen did it in 2011. Good with your hands? You remember that paint set that you use to keep your table level? Break it out and play around. Embrace a new art and a ‘no mistake’ mentality even though that one you’re doing right now is indeed pretty shitty. Taking initiative and following through on projects will keep your spirits up and help you feel productive.

Open yourself up and be kind to others. Lets be honest with one another, deep down we’re all scared, and that’s a completely normal response to this. We read the news every five minutes and are constantly checking in to make sure Tom Hanks is ok. And because we’re all scared, we’re in self preservation mode. We don’t want to get sick, and so we prioritize our health over others. Now I’m not saying to roundhouse kick that guy who took the last hand sanitizer, I’m saying we’re all in this together so have some empathy. I recently went on a late night walk (don’t you judge me) and I came across a frantic girl who came running up to me. She was lost and her phone was dead. Four months ago this would’ve been an easy fix, but now that I live on the streets of Greek suburbia apocalypse-town, I had a different initial impulse.. Of course a white flag went off in my Type A OCD head saying ‘What if she pulls your mask down and then coughs into your mouth!’ BUT I of course helped her out – I’m just pointing out that our mentality for survival is shifting. Finding ways to be helpful to others will be everything in this brave new world. This is a generation defining event we are all going through and it’s important to remember that we are all in this together even though we all may feel so distanced.

Granted, we all won’t have frantic lost people to aid in the night, but you can be a better person in smaller ways as well. Remember that friend who used to slay at karaoke but then went back to college to get their Pysch degree? Reach out to them and let them know how much you enjoyed their voice. Remember that guy who has only maybe seen five movies in their lifetime and when you try to explain 28 Days Later they stare at you blankly? Venmo them five dollars and change their life. You’re welcome for those 2 life-changing hours, Alex.

We all may be miles away from one another and biting our lip behind filtered masks but we can get through this. Don’t let the absence of things become a comfort to you. The tools are there for you. I believe in you and so do others. Reach out to friends, start a project, get someone to smile and always remember – no one will judge your Netflix Queue except those 19 friends you gave your account password to.

Never hesitate to reach out and say hello! I promise to make you smile: deven@mustardlane.com